I know I said I probably wouldn't be blogging until we came back from vacation, but I loved these and had to share. We will be leaving August 31st for two weeks in our used-but-new-to-us motorhome. I'm hoping I have some cool stuff to share as we travel. In the meantime, I made these fish cakes the other night. Let me rephrase that. I sort of made these the other night.

The more I looked at the recipe, the more hesitant I became because the only seasonings were salt, pepper, lemon zest and chives. Perhaps it would make the white fish it called for in the recipe sing, but I was using canned salmon instead of white fish and I needed some spices or herbs that would stand up to and compliment the strong flavor of the salmon.

What I ultimately decided to do was combine this recipe with another recipe for Crab Cakes from the cookbook, Catch by Travis Lofland of Deadliest Catch. My son made the Crab Cakes for Travis' book signing on Anna Maria Island, FL and they were by far the best I've ever tasted.

What I liked about the Bon Appetit recipe was the addition of the corn and lemon zest, so I kept those in my recipe.

I didn't take a photo of the finished product, but I did manage to take a photo of my lunch the next day.......a salmon cake slider...with the leftovers. Sorry for the horrible photo. I took it with my phone. 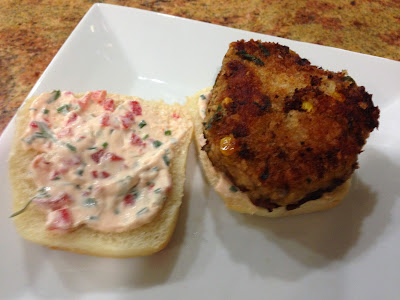 Anyway, I made this Roasted Red Pepper and Chive Aioli to serve with them and they were delicious. This recipe made 12 nice sized Salmon Cakes. I used an ice cream scoop to portion out the patties, which yields the same amount as a 1/4 cup measuring cup.

Dump the salmon in a large bowl and break it up with a fork. Sprinkle the salmon with lemon zest, chives, parsley, jalapeno, onion, red pepper, corn and Parmesan cheese, gently tossing with a fork after each addition. Set aside.

In a small bowl, whisk together the mayonnaise and eggs until they are thoroughly combined. Whisk in the salt and pepper. Fold the mayonnaise mixture into the salmon mixture using a rubber spatula to gently combine.

Begin sprinkling the salmon mixture with the Panko bread crumbs about 1/4 cup at a time, gently folding to combine after each addition until all of the crumbs are used.

Using a 1/4 cup measure or ice cream scoop and form the patties to about a 3-inch diameter. Place on a parchment lined baking sheet and refrigerate until they are firm, at least 30 minutes. You can skip this step and cook them as they are, but you run the risk of them falling apart while they cook.

Here's where I stepped away from both of the original recipes I noted above. I did not reserve any bread crumbs to cover the surface of the patties before cooking. When my son made the Crab Cakes, he also omitted that step. I just didn't want to "over-bread" the patty.

Heat the oil and butter in a large skillet over medium-high heat and add the patties a few at a time, being careful not to over crowd your pan. Cook the patties until they are golden brown about 3-1/2 to 4 minutes on each side. Remove to a serving platter. Enjoy!

Oh salmon cakes! One of my friend suggested me to try this one because of its delicious taste. Best blog